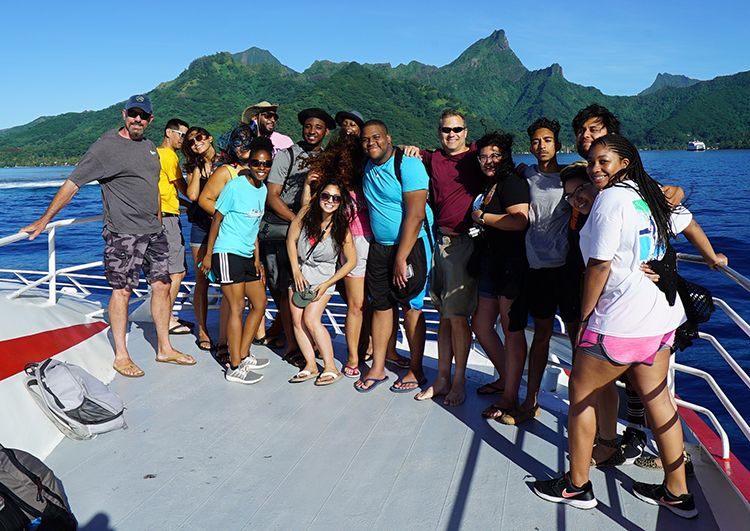 The 2018 edition of  The Diversity Project returned to the Gump Tropical Research Station in  Mo’orea, French Polynesia for another summer of research. What an amazing group of students. Thanks to Smithsonian Researcher Eric Caldera, NSF Postdoctoral Fellow Caitlin Fong, and UCLA graduate students, Erick Zerecero and Shalanda Grier for all your help! 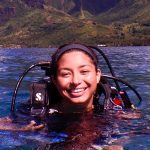 Comments on The Diversity Project: “The Diversity Project is unlike most summer REU programs in that it gives you the training necessary to pursue marine research in the future and develops your confidence as a marine scientist by allowing you to create your own research project. The professors and mentors of the program are there not only to help you with your summer project, but to support you and help you along your own path throughout your scientific career. After the program was over both Paul and Peggy served as my mentors and advocated for me as I applied to graduate school.“

Where is she now?  Blanca is a Ph.D. student at UCLA in the Atmospheric and Oceanic Science Department. She studies biomineralization of marine calcifiers and the mechanisms behind certain species’ resiliency to ocean acidification. 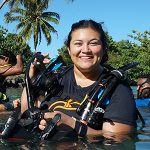 Comments on The Diversity Project: “Nothing I have done prior is comparable to the experiences I had in TDP.  This program is a lifetime impact not just a summer. If you are interested in learning about field work, doing research, asking questions about programs, and making friends in the process APPLY.”

Where is she now? Austin is completing her masters in Ecology and Evolutionary Biology at UCLA, and is joining the same PhD program in Fall 2022! 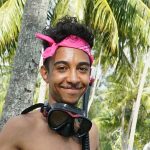 Comments on The Diversity Project: “This was a truly life changing experience. Not only will you get valuable experience with underwater research and travel abroad, but you will also gain mentors and friends that will last a lifetime. “

Where is he now?  Eli finished his BS at Howard and is now a PhD student in the Institute of the Environment and Sustainability at UCLA! 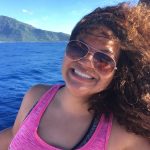 Comments on The Diversity Project: “The Diversity Project gave me the confidence and tools to see research as a part of my future and career, it showed me just how far I could go following my passion for science and innate curiosity. In addition to the hard skills and experience I gained, TDP gave me sincere connections with other passionate, intelligent young scientists that have become collaborations we will build on for a lifetime. I highly recommend this program with no hesitation whatsoever, because it has proven to be one of the most valuable and meaningful summers of my life!“

Where is she now?  Ileana finished her degree at Hampton University and is now a PhD student at the University of North Carolina! 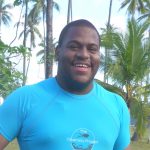 Comments on The Diversity Project. The Diversity Project was an experience of a life time that I didn’t think I could fully participate in because I couldn’t swim before getting accepted. With only having two months to get scuba ready, I went to my schools swimming pool virtually every day. I had days where I thought to myself, “What am I getting myself into?” or “I just can’t do this…”, but I didn’t give up. Through hard work and perseverance, I was able to become scuba certified through this amazing program! So don’t think that a lack of swimming experience will hinder what you can achieve through this program, you too can become scuba certified and a snorkeling master if you work for it.”

Where is he now now: Hunter finished his bachelor’s degree at UMES and is now a graduate student at the University of Puerto Rico! 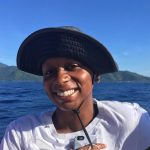 Where is she now? Alexis completed her degree and competitive basketball career and is now a graduate student at the University of the Virgin Islands! 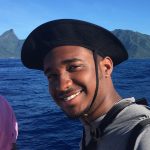 Comments on The Diversity Project: “The Diversity Project is such a life changing opportunity that opened my eyes to a variety of different paths that I could take as an early career researcher. I was able to gain and improve on many science-based skills that I will keep with me for the rest of my life that includes swimming and scientific diving, networking, science communication, critical thinking, scientific reading and writing, and many more. This program encouraged hard work, introduced me to fellow undergraduate researchers, professors, and graduate students who I am still in contact with, and gave the opportunity to go abroad. I encourage anyone who has an interest in research and marine science to step out of their comfort zone and apply for this program.”

Where is he now? Isaiah is back at Hampton University completing his senior year and pursuing Master’s Programs at Oregon State University and Virginia Tech. 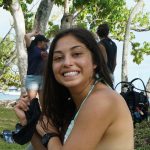 Comments of TDP: “This was an incredible experience to be a part of. I learned so much throughout this project and met an amazing group of people. I felt tons of support throughout the entire process, and the experience overall has been life-changing.”

Where is she now:  Having graduated from UCLA, Bianca moved to Silicon Valley where she is working as a data analyst with Apple Maps. She’s looking forward to  applying to a GIS graduate program in the future. 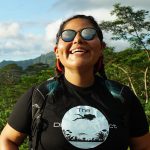 Comments of TDP: “The Diversity Project was by far the most impactful experience I had during undergrad! Being part of the program taught me so much about science, opened me eyes to the potential opportunities for graduate school, and gave me the confidence I had been searching for throughout undergrad. For me, the best part of TDP was the mentorship that I received from all of our mentors, but especially Paul and Peggy.  am so grateful to have them as part of my support system as I go through the process of applying to graduate school and figuring out my future. I still feel so fortunate to have been part of such a uniquely amazing experience!”

Where is she now: Judith is currently currently a PhD student at Tulane University! 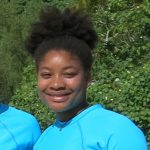 Comments on The Diversity Project: “This is the best undergraduate research program! I learned what it was like to be a researcher in the field collecting data, I learned how to work with others, and I learned how to develop my own ideas into a viable project. Paul and Peggy are the best mentors I have ever had in my life. They create a space where students can flourish as a scientist (and as a human being), they truly care about the success of each student. If you are thinking about applying, just apply.”

Where is she now: Nefertiti is a PhD student at UC Irvine! 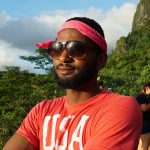 Comments on The Diversity Project: TDP was the experience of a lifetime. in a complete view, from the views and scenery to the people that we met and became close friends with, it was an experience of a lifetime. Even with a touch of island madness, you can’t help but have a great time learning new things everyday. Paul, Jeannie, Peggy and Cat are running a special sort of program unlike any other because you truly become a family with your cohort complete with stories and inside jokes all the way through. The exposure to new things is the best aspect of the program. You’re doing new things all the time you really get a chance to decide what appeals to you. I’d do it again if it could!

Where is he now: Raines graduated from Howard University, and is currently working as an environmental consultant before applying to graduate school.